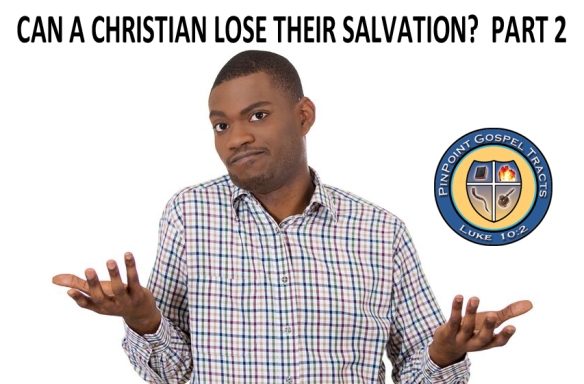 This the second part of proving the doctrine of Conditional Security, from the Bible.  If you want to read Part 1, then GO HERE.  Last time, I gave plenty of Scripture showing how someone can TRULY know that they are a Christian.  God wants us to have assurance of salvation.  He doesn’t want us to be insecure about our salvation.  I also posted a video where I talk about a number of passages from the Bible, that emphatically prove the doctrine of Conditional Security.

This time, I want to go through some examples in Scripture where people actually departed from the faith.  They either stopped following Jesus while He was still alive or they departed from the faith after Jesus rose from the grave.  Either way, these are examples of people “losing their salvation” and therefore are Biblical proof that the doctrine of Conditional Security is true.

The Disciples from John 6

John 6:66:  “From that time many of His disciples went back and walked with Him no more.”

Many DISCIPLES turned back from Him.  Keep in mind that in Scripture, “disciple” is synonymous with believer or follower of Christ.  One can’t be a “disciple” without being a follower and vice versa.  Yet, after a difficult saying from Jesus, these “disciples” ” went back and walked with Him no more.”  So, these “disciples” used to “walk with” Jesus and they decided to “go back” or “backslide.”  People can twist it any way they like, but the Scripture says what it says.

Some people will have you believe that Judas was never “saved” or that he never TRULY followed Jesus.  They would say that he was a “devil” from the beginning.  The Bible says something altogether different.  In Matthew 10, Jesus is speaking to all twelve of His disciples (Matthew 10:1).  Therefore, these things were true of Judas, at that point in time:

-He was given power over unclean spirits to cast them out (Matthew 10:1, 4)

-He was given power to heal all kinds of sicknesses and diseases (Matthew 10:1)

-Jesus commanded him to preach the Kingdom of Heaven (Matthew 10:7)

-Jesus commanded him to “Heal the sick, cleanse the lepers, raise the dead, cast out demons” (Matthew 10:8).  These are things that Judas freely received from Jesus (Matthew 10:8)

-Jesus commanded him to shake the dust off his feet if people didn’t receive him and that it would be worse for such people on Judgment Day than for Sodom and Gomorrah (Matthew 10:14-15)

-Jesus said that the Holy Spirit would speak through him (Matthew 10:20)

-Jesus said that Judas would be hated for His name’s sake and be persecuted (Matthew 10:22-23)

-Jesus said that if Judas endured to the end, he would be saved (Matthew 10:22)

-If someone is given a cup of water in Judas’ name, he will be rewarded (Matthew 10:42)

Would you really have me believe that Jesus would say all these things about a person who was wicked, totally depraved, a follower of the devil, a child of wrath and who not only was not saved at the time, but was never saved to begin with? Not only is all of the above emphatic proof that Judas was once a TRUE FOLLOWER of Jesus. Jesus also said this, in John 17:12 – “While I was with them in the world, I kept them in Your name. Those whom You gave Me I have kept; and none of them is lost except the son of perdition, that the Scripture might be fulfilled.”

It’s obvious from the context of John 17:12, that Jesus is talking about the 12 disciples only. And what did He say about Judas?  He was lost.  He is the one disciple who was not “kept” like the other eleven were.  In order to “lose” something, you must “have it” at some point in time.  In order to not “keep” something, you must’ve owned it or had it in your possession at some point in time.

Then there were many people that Paul Talked about, who had fallen away from the faith. He mentioned some of them specificly, by name, while he mentioned others by general group.  These were people of his day, who He knew and ministered to.

Paul said the following about the Church of Galatia:

–Galatians 1:6-7 – They turned away from the grace of Christ, to a false gospel, which is a perversion of the true.

–Galatians 3:1 – They had been “bewitched” into not obeying the truth of the gospel.

–Galatians 3:4 – The suffering they had endured up to this point would all be in vain, if they continued down this same path.

–Galatians 4:11 – Paul was afraid that he had labored in vain, concerning them.

–Galatians 5:4 – They had become estranged from Christ and had fallen from grace.

-Galatians 5:7-9 – They HAD RAN well, but had now become hindered from obeying the truth.  They had let a little leaven come into their lives.

If Paul was one of your ministers, could he say these things about you?  I hope not!

–1 Timothy 1:5-6– Some had strayed away from a pure heart, a good conscience and sincere faith.

–1 Timothy 1:18-20– Hymenaeus and Alexander are two people who had stopped waging the good warfare, had rejected the faith, had rejected a good conscience and their faith had suffered shipwreck. Paul had delivered them over to Satan that they may learn not to blaspheme.

–1 Timothy 5:11-15– Young widows had grown wanton against Christ, having condemnation because they cast off their first faith. They had become idle talkers and gossips.  They had turned aside after Satan.

The Seven Churches of Revelation

–Revelation 2:4-5 -Some people at the Church of Ephesus had fallen and left their first love.  If they didn’t repent, Jesus was going to remove their Church completely.

–Revelation 3:5 – If the people of the Church at Sardis who were in sin, did not repent and overcome, their name would be blotted out of the Book of Life.

–Revelation 3:16 – Some of the people of the Church of Laodicea had become lukewarm.  If they didn’t repent and overcome, Jesus was going to vomit them out of His mouth.

These passages are so obvious.  They obviously support the Biblical Doctrine of Conditional Security.  There’s no way to twist these passages into a theological framework that includes Once Saved, Always Saved (OSAS) or Perseverance of the Saints (POTS).  In order to even attempt to read these passages in this way, you would have to come to the passages with your preconceived doctrines and try to make them work.  That’s called eisegesis.  We simply need to read and believe what the Bible PLAINLY says!

1 thought on “Conditional Security Proven From The Bible! Part 2 – People in the Bible Who “Lost Their Salvation” by Kerrigan Skelly”